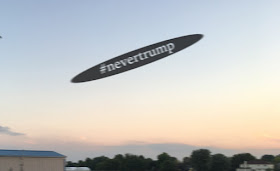 The group, calling themselves the Coalation for Beings Treating Each Other With Respect, released a statement:  “The Greater Interstellar Community has invested trillions of credits to persuade your leaders not to destroy your planet.  Mayor Roger Claar’s support for Donald Trump undermines our efforts to bring humanity into a greater galactic community.  We hope the temporary suspension of traffic will help Roger see the error of his ways.”

The group also cited Donald Trump’s calls to evict extraterrestrials from Earth, and his support of Alex Jones as reasons for the blockade.

During the blockade, masked members of the Clow Interstellar Dock Workers Union Local 1978 served Tacos and passed out leaflets supporting the blockade.

Al, who asked that we not use his last name, was particularly offended that Mayor Roger Claar will be co-hosting the fundraiser.  “We have a vibrant Muslim community in Bolingbrook, and he’s supporting a candidate who wants to ban Muslims from entering this country.  These are our neighbors who help make Bolingbrook a great place to live.  He shouldn’t insult them by hosting Donald Trump.”

A spokesperson for Clow denounced the blockade, claiming it would cost Bolingbrook business thousands of dollars.  She that Claar was showing mercy by not firing on the UFOs.  “We understand that Donald Trump’s candidacy creates high emotions across the universe, so we will tolerate this little protest, provided they leave when the promised to leave.”

Some aliens, were not pleased with the blockade.  Said Olkyop, “I have a precious cargo of mice to deliver to the galactic hub, and I’m stuck here.  These aliens don’t care that the price of mice could plummet before I can sell them!”

Other supported the protest.  Said Glokbp, “Donald Trump is ruining the reputation of all Orange Skin being in the Milky Way.  Not all orange skins support racism.  Somehow we have the ability to not forward messages from the trendy right hate groups!  Donald doesn’t.”

A receptionist for Claar said he would not talk to the Babbler, and said his comments to WJOL were enough for now.

In the background, a man who sounded like Claar said, “Don’t worry, Ed.  I’m sure that was just a normal star in that tweet.  Besides, I’m thinking long term.  If Trump loses, my wing of the Republican Party will take over, and we’ll make sure that only the best people will select the best candidate, no matter how hard our voters may try to mess things up.”

Also in the Babbler:

Please note: All articles on this site are works of fiction.
Unknown at Monday, September 05, 2016
Share