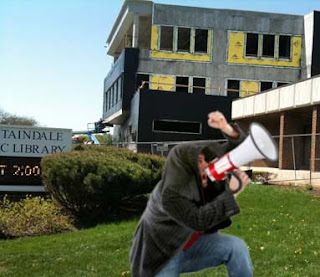 Six supporters of the Revolutionary Communist Party protested in front of the Fountaindale Library in Bolingbrook. Despite chanting outside the library and threatening to stage a sit-in, no arrests were made.

According to sources, the protester were angry because the organizers of Bolngbrook’s Enlightened Discussion, a two day convention, decided not to invite Sunsara Taylor to speak.

“How could anyone not invite her to speak?” Said David Z. Bond, a protester from Chicago. “She’s stood up to Bill O’Riley, and she’s the best promoter of Chairman Bob Avakian!”

Dale X. Chu, another Chicago resident, said he heard a rumor that the organizers made a joke about Taylor.

“I’ve heard from a friend of a friend who reads enlightened e-mail lists, that the organizers considered having tagline, ‘Come to BED with Sunsara Taylor.’ Even thinking of her in a less than feminist manner is counterrevolutionary!” Chu then held up a red book and whispered, “Accept my self-criticism, Bob, for I’ve had oppressive capitalist thoughts!”

After chanting outside the library, and demanding to speak with a library employee, librarian Donna Habenstein met the protesters outside.

Habenstein asked what the protesters wanted.

Bond replied that they wanted Taylor to be invited to BED. “I mean Bolingbrook’s Enlightened Discussion! Accept my self-criticism Bob!”

Habenstein replied that the Library had no control over BED.

“Don’t say BED!” Yelled the protesters before they started writing in their red notebooks.

“No!” Replied Bond. “We want to disrupt their meeting!”

“If you want to disrupt their meeting, we’ll have to call the police!”

“We’ll videotape it!” A protester exclaimed!

“Then we’ll video tape everyone trying to access the Internet!” Said Chu

“Except those who are trying to learn about Chairman Bob!”

Before Habenstein could reply, a protester’s cellphone rang. “It’s Sunsara!”

According to Habenstein, the protester put Taylor on the speaker phone. She admonished them for holding an “unauthorized action.” Taylor then said she would give them a chance to explain why they did not consult the vanguard party first.

Bond explained that they wanted to be considered worthy of the “advanced thinkers” of the Revolutionary Communist Party. They hoped that if they organized their own protest, they would be allowed into the vanguard party.

Taylor, according to Habenstein, said, “Now that I have condescended to listening to your excuses, I have reached my decision. All of you will go back to Chicago and write a self-criticism. Then I will make sure you are all properly educated about the error of your ways!”

Before the protesters left, one of them handed the phone to Habenstein. Habenstein said Taylor apologized for the actions of the protesters, and offered to give the library free copies of Avakian’s books.

“I told her to wait until we finish building the new library. Then she started talking about ‘synthesis’ and the ‘science of revolution’ and something about the Internet being full of images of child rape. That’s when I hung up. Boy, I thought the Brook Report was bad.”

When reached for comment, Taylor replied, “I already have a speaking engagement then.  Still, I wish they would have respected me with an invitation.  This will be remembered after The Revolution.”

The organizers of BED send an e-mail to The Babbler, claiming that they never considered inviting Taylor to speak.

“We’re looking for speakers that are critical of materialism. Like Deepak Chopra or Dr. Charlene Warner. We want speakers who will go beyond the TED speakers.”

When this reporter went to Mayor Roger Claar’s home for a response, Claar opened the door and said, “For your information, I have been a Republican longer than you have been alive! How dare you accuse me of working for the Democratic party. Just because I know the correct name of their party doesn’t make me a Democrat.”

He then pointed towards his flags. “I don’t see any communists flags up there, do you?”

Claar then slammed the door shut. A few seconds later, he opened the door. Holding a phone, he said, “You’re not the conservative blogger, are you?”

This reporter said no.

“Then don’t take my comments personally.” As he closed the door, he said into the phone, “Now as for you!”


Also in The Babbler:
Scientist: Iceland volcano will destroy the world!
UFO misses Bolingbrook and blows up over Wisconsin
Anti-psychic kitty banned from James Randi’s Internet forum
God to smite Bolingbrook on 4/25/10

Please note: All articles on this site are works of fiction.