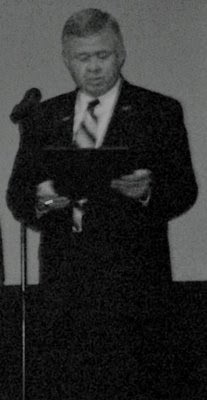 Fooled into thinking that he was watching a play, a theater critic trashed Bolingbrook's 6/9/09 Board meeting.
"This play is pretentious!" Said online critic Shakesphere. "No, it's worse than pretentious. There is no word for the idiotic arrogance I saw those players try to stage. Note I said players, not actors!"

The Babbler obtained exclusive excerpts from Shakesphere's review, which was intended for Ain't It Cool News' theater section. Shakesphere believed that he was reviewing a free play called "Village of the Bored" produced by The Performance Art League of Bolingbrook.

The Performance Art League of Bolingbrook is unknown group or individual that sends out press releases about ordinary events and tries to add an artistic spin to them. In 1985, the league tried to turn Mayor Bob Bailey's swearing in ceremony into "An ode to the 1970s!" No one knows if they are "re-appropriating" everyday experiences into artistic works, or if it is just a college prank that have gone on for way too long. Though the PALOB has sent out press releases since 1983, Shakesphere is the first critic to actually review one of their "events."

Shakesphere believed that the "play" involved audience participation. So he was very upset with Mayor Claar's new rules for comments from the public. Especially the rule that questions submitted during the meeting would be answered at the next meeting, and could only be addressed to the Mayor. The Mayor has the option to allow a trustee to answer a question.

"Two weeks to come up with lines for a question?" Asked Shakesphere. "This is the Chicago area. You can't sneeze without hitting someone who has had improv training! Even Naperville has an improv school! There are thousands of out-of-work improv actors, and these guys have two gigs a month? Epic fail on all levels!"

Shakesphere also took offense when the board recognized Flag Day, and had military personnel speak during the meeting.

"It's as if they were trying to say that it is Un-American to hate this play." Wrote Shakesphere. "I'm sorry, but extreme patriotism in the defense of bad art is a vice. That is so 2003, so I guess that makes the author of this play 2000 and late!"

He did say that Claar might have a future on the stage, but still needed a lot of work. "His expressions range from pompous to (expletive deleted)-off. I don't know if it was due to the way this mayor character was written, or if the player just doesn't have the acting skill to pull off a believable character."

Shakesphere even savaged the set-up of the boardroom.

"I guess the stage was set up to make it appear that the mayor character was cornered, and the world is out to get him. But early on in this so-called production, it is apparent that the mayor is in complete control. The design just crams most of the action into stage right. Ninety-five percent of the stage is wasted with obviously bored players who are reading off the script!"

He was also, to put it mildly, disappointed with interaction between Claar and the members of Citizens for a Better Bolingbrook.

"They asked some questions with some good dramatic potential, but due to the players lack of skills, we won't hear the answers for two weeks! There was some drama when a woman and the Mayor played He Said, She Said. (Get it?) Come on playwright, you had potential with the whole police subplot. Was she lying? Was the police chief lying? What was really going on? You left us hanging. If you don't know how a subplot will end, don't put in your play!"

The "climax," which Shakesphere interpreted as the confrontation between a spokesperson for CBB and Claar, only angered him.

"This went beyond the players reading their scripts on stage. I was watching the playwright walking on stage with his laptop and trying to re-write the play during the end of the production! Not only that, but he was trying to add lines involving statues or some kind of boring legal language. He invoked the First Amendment, as if to imply that it was unconstitutional to hate this play."

Claar told the speaker to leave the stage after his three minutes were up. In the review, Shakesphere wanted some kind of dramatic resolution. Instead the man returned to his seat, a few minutes later walked back to the microphone to complete his speech, and was told by Claar that he couldn't. After threatening to complain to Illinois Attorney General Lisa Madigan, he sat down again. Shakesphere's comments about this exchange are unprintable.

Finally Shakesphere concluded, "When the climax of your play hinges on a middle-aged dude getting pwned by an old dude, your play has crossed the event horizon of suck. Now some people say I should be more open-minded, and look at this as some kind of dramatic experiment. Nonsense. This play is nothing more than a Gen X whine that is as sloppily put together as their Xeroxed zines, their grunge bands, and their plaid wardrobes. They confused crap for creativity, (Expletive deleted) for sophistication, (Expletive deleted) for progress, and then wonder why they screwed up the world, and we had to elect Barack Obama to set things right! I didn't pay anything for this play, and I still want my money back. And if the playwright is reading this, make of that what you will!"

When asked for comment, the village trustees stated that Claar must clear all Babbler interviews.

Claar laughed when we told him about the review. "I would be happy to compare my campaign fund with his campaign fund."

No one from Citizens for a Better Bolingbrook could be reached for comment.

As for the review itself, it is very unlikely to appear on Ain't it Cool News.

"Unless it has aliens, superheroes, monsters, or Samuel L Jackson, we won't post about it." Said a spokesperson for the site.
Please note: All articles on this site are works of fiction.
Bolingbrook Babbler at Wednesday, June 10, 2009
Share